Sooke, BC — The problem with ministers in the PCC?

“You’ve got a bunch of ministers and administrators,” says Rev. Gord Kouwenberg. “We need vision catchers who understand the prophetic role of the clergy. We’re not prophetic in casting vision before the people so that the people are stimulated to act.”

Not that he takes the credit for building an $11.3 million affordable housing complex beside his congregation, Knox Presbyterian Church. It’s God’s hands that provided direction, and those divine hands are working with the community and the provincial government — which is providing half the construction cost — to make it all happen. He’s just listening and acting. “If you do what’s required, God will bless it.”

When Gord was called to Sooke in 2007, the congregation told him “we have enough money to pay you for two years.” He got to know the community. He saw gaps in medical and urgent care, no laundromat, a 40-minute drive to the nearest hospital and a lot of mortgage-poor people, seniors and a significant transient population. “We are called as humanity to care for the widows and orphans, the needy, those who live on the fringes.” said Gord. The vision was for a “campus of care.” Red tape and regulation forced the original plan of 192 units to be whittled down to 42 units. To make it happen, Knox formed a not-for-profit agency, the Knox Vision Society, with each member as a shareholder. Strictly following Canada Revenue Agency standards, the Society will manage the complex. It’s a way of serving the community for decades to come while assisting the congregation: the complex administrator will also serve as church secretary. 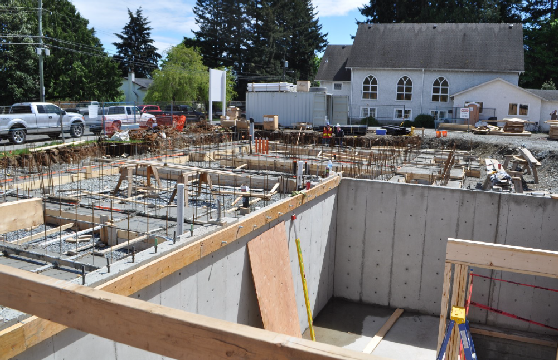 Don’t think of this as traders in the temple: no one’s making a profit. Rent will be considerably below market costs, and with completion several months away, there’s already the makings of a waiting list to get in.

And don’t get the idea this is merely social justice. None of this would happen without a solid spiritual foundation. “You know how renewal happens? It’s when people start studying scripture.” Sure enough, his small congregation, which sees approximately 40 people on Sunday, now has two weekly Bible study groups in which half the congregation participates.

And what of the congregation? “We will provide a legacy to the community even if we close the doors.”