Requiem (noun) — 1) A Mass for the repose of the souls of the dead. 2) A musical composition setting parts of a requiem Mass, or of a similar character. 3) An act or token of remembrance. [Source: Oxford English Dictionary.]

It’s the third definition which fits Rev. Don MacLeod’s latest published writing. An almost-legendary figure in the PCC, MacLeod had an extraordinary career which touched no fewer than eight decades (if one includes his first sermon at the age of 10 — all the way to the 2020.) A Presbyterian Requiem is billed as a “memoir” of six appointments, but it could also be described a “blow-by-blow account.” That’s not to sensationalize or dramatize. Rather it’s to point out that in ministry, there is never a dull moment. MacLeod bears witness: “Yes, there are scars, but only in service of the One who was scarred for me on Calvary,” he notes in the introduction. Of course, there are many joys in ministry too, otherwise we would not remain standing: “Years of ministry have surrounded me with a host of friends who have greatly enriched my life,” he states. That sentence describes the substance of the memoir: a rich and vivid description of the faithful souls which have surrounded one minister as he and his family traversed Presbyterian terrain on both sides of the Canada/United States border. 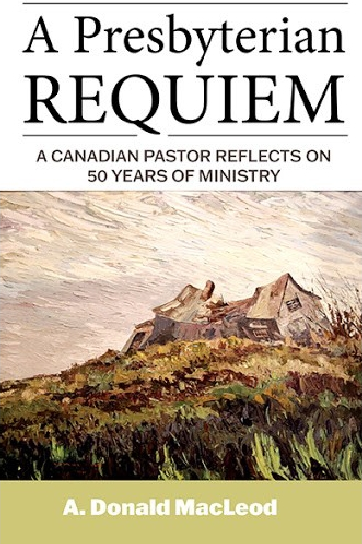 This is a really good read. I am tempted to describe it as a page turner. What draws you in are the insights into ministry at every level. Each chapter brings something new. It’s a must-read for anyone interested in a dose of PCC history from an evangelical perspective. It’s a rich collection of names, places, dates and experiences. Any pastor would be encouraged after reading this work for the simple reason that it’s always good to be reminded that we are not alone.

Back to the title. Requiem indicates a loss. MacLeod admits that his narrative is more than just “a personal description of what I have observed and participated in. It is a requiem for all that has been lost in the passage of time, as well as a reminder of what made us once a great church.” These are not the tears of someone who yearns for bygone days as mere nostalgia.   No, they are a lament shared by those in every generation who search for a more authentic expression of Christ’s body. On that note, it’s worth mentioning that MacLeod was the founding chairman of The Renewal Fellowship and remains a vibrant supporter.

MacLeod offers an encouraging conclusion. I won’t offer any spoilers, but if you need a dash of hope, it awaits.

Looking for a gift for a PCC pastor in your life? It’s available for purchase on Amazon in hardcover, paperback and Kindle editions.

Saturday, January 16, 2021 - Pray for Valleyview Community Church, Calgary, Alberta, as they continue to execute their Be the Blessing project. Each person in the congregation is being encouraged to bless someone with $100 cash in Jesus' name and then share their blessing story.